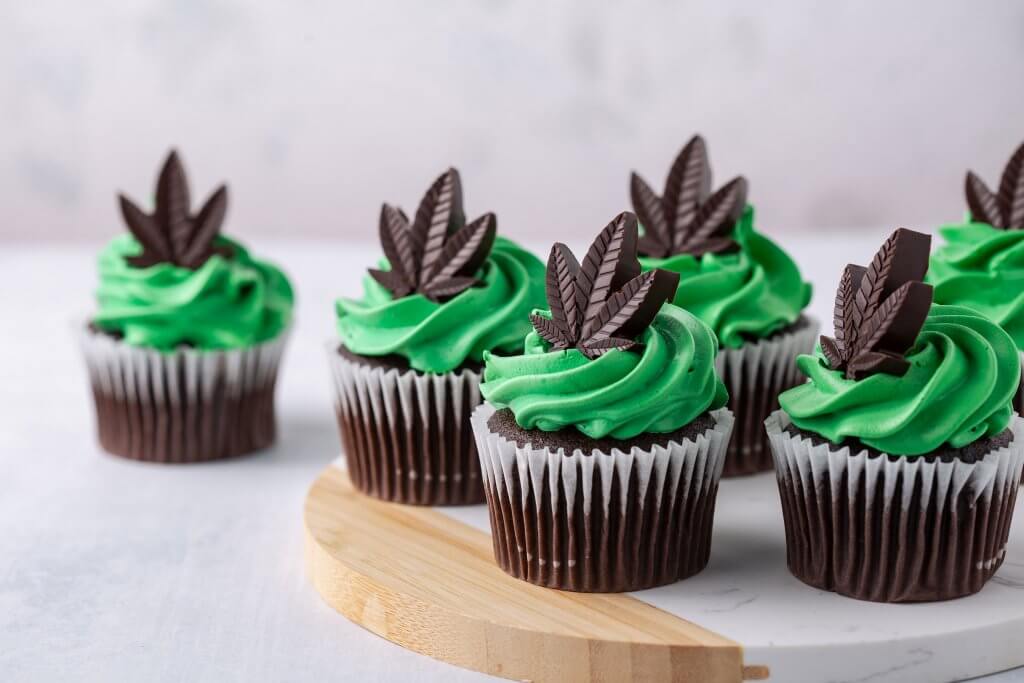 Smoking weed is fun, and with some strains, it can be a delectable affair as well. Even the sweetest sativa cultivar can’t compare with the lusciousness of weed cupcakes, though.

Why not ditch the smoking paraphernalia for a night and send yourself into new heights with a sweet feast you made at home?

Whether you’re an edible connoisseur or a rookie in the field of canna ingestion, this recipe is for you. It’ll keep you out of the dispensaries and inside your kitchen the next time you’re itching for a different kind of delight.

Today, we’re sharing our favorite marijuana cupcakes recipe. We also discuss this consumption method to ensure our stoners stay safe while enjoying themselves.

Do weed cupcakes get you high?

You might catch yourself looking at that little, innocent-looking weed cupcake and thinking that you won’t feel a thing. You’re mistaken. In fact, an edible high is stronger than the smoke from your blunt or bong.

How do edibles work, then?

When you smoke weed, it enters your bloodstream in an instant. The effects are near-immediate. Eating 420 cupcakes means that the cannabinoids have to go through your digestive system before reaching your blood, brain, and body.

Weed compounds ingested through the gut stick around for much longer and have a stronger influence on your system. Otherwise, the effects are similar to what you’d expect from smoking your favorite strain of ganja.

The specific impact of your edible cupcakes depends on the weed in the cooking product you use. You have two main options:

Note: You can make cannabutter cupcakes instead of using oil for baking.

How long do 420 cupcakes take to kick in?

The taste of a cannabis cupcake made with our recipe is sure to have you itching for seconds. Despite your craving, exercising self-control is key to having a good time with weed edibles.

Sugar and calories are the least of your concerns here. Remember, ingested marijuana takes much longer to kick in than the same bud in a blunt. That second piece of dessert might take you higher than you want to go.

Generally speaking, weed cupcakes need between an hour and three hours to take hold. The potency of marijuana used, the amount of food in your stomach, and your body composition all affect when you start feeling intoxicated.

Pro tip: If you’d like to get high faster, eat the pot cupcake on an empty stomach. Have a wholesome meal beforehand to delay the reaction.

Give it at least two hours before taking another bite or two. The effects take their time to manifest, and waiting reduces the risk of uncomfortable side effects of too much THC.

How long does a cannabis cupcake high last?

The delay in the 420 cupcake high isn’t for nothing. Apart from coming at you with more power, the effects last much longer. As a rule of thumb, expect to stay at least mildly intoxicated for up to six hours, with the peak occurring around hour three.

As with everything else, the duration depends on your dosage, tolerance, and metabolic rate. You might sober up as early as four hours in if you have a super-high tolerance. Rookies could ride the wave throughout the night.

Note: Given the unexpected qualities of the weed cupcake high and its potential to hit you and last, it’s best to start with small doses. Only increase them when you feel comfortable and become familiar with how your body reacts.

How to make weed cupcakes in 5 steps

Now that you’re educated and eager for some edibles, let’s move on to our favorite weed cupcakes recipe. Follow our suggestions to cook up a pure delight or switch up the flavors according to your preferences.

Note: We at Homegrown believe that every stoner should enjoy the fruits of their labor, which also goes for edible cupcakes. For that reason, the first step is making cannabis oil at home.

Your cannabis cupcakes need a special kind of oil to work their magic on the system. You can purchase this in dispensaries or promote sustainability and always know what you’re ingesting by making it at home.

The latter option includes a process called decarboxylation, which is a fancy way of saying you heat the buds to activate the cannabinoids in them.

You’ll take your cured flowers, break them apart into smaller chunks, and place them in an oven. Leave it at 240°F for around 40 minutes to trigger THC production.

Note: If you’re looking for a more therapeutic type of weed cupcake, bake your flowers for 90 minutes to activate CBD.

Once the weed’s decarbed, here are the steps to make cannabis-infused oil for your pot cupcakes:

Congratulations, you now have the most important ingredient for your marijuana cupcakes. You can later use it for other types of alternative baking, too, from weed brownies to weed pasta sauce.

Now that the number one ingredient is all set, let’s gather everything else for your baking project.

Our chocolate weed cupcake recipe keeps things pretty simple with a vanilla dough base and a hearty sprinkling of chocolate. Feel free to take the dough to the next level with cocoa, cinnamon, vanilla cream, or whatever else you’re craving.

You can always use a box of cake mix and store-bought frosting instead, but where would the fun be in that? Follow the same principle as you did with the cannabis oil and put quality over ease for tastes you won’t forget.

Here’s what you need for baking the cupcake base from scratch:

What differentiates cupcakes from marijuana muffins is the frosting. Collect these ingredients for homemade buttercream:

Cupcakes with pot are just as straightforward to make as any other sweet pastry. Here’s how to prepare and bake soft, moist cakes step by step:

While the cannabis cupcakes cool, it’s time to make the buttercream. Our recipe has a neutral vanilla taste, acting as the perfect base for any flavor you desire. Here’s how to do it:

Step #5: Put it all together

The weed cupcake base and frosting are made, cool, and ready to come together into one perfect mix.

Pour the frosting into a pipe and spread the cream across the cupcakes. The spread doesn’t have to be smooth or even, only generous. You’re aiming to make a fun treat, not a perfect piece for a photoshoot.

Once the base marijuana muffin is ready, the world of weed cupcake design is your oyster. Take these ideas that work for different occasions and become the honored guest at every pot party you attend.

Start with these simple decor tricks and work your way up to weed cupcakes so majestic you almost won’t want to eat them.

What better way to tell regular desserts apart from your special batch of stoner cupcakes than by evocatively designing the frosting? Weed-themed cupcakes might sound a bit corny, but they’ll put a smile on your face.

If you’re looking to keep things simple, pour some green dye into your frosting. Sprinkle it with chocolate and kief, and you’re good to go.

Alternatively, get a five-fingered leaf cookie cutter (you’ll find these in many novelty stores) and some soft cookies. The familiar shape protruding from the cream adds a special touch to your cannabis cupcakes.

Birthdays are special occasions, and your dessert is here to help celebrate in style. Instead of a traditional cake, why not bring an arrangement of birthday weed cupcakes and let everybody have one for an unforgettable party?

Our favorite idea here is pretty simple. Dye the frosting green, stick in some white candles to resemble blunts, and add a generous sprinkling of kief.

How to make edible cupcakes that keep things on the fancier side? It’s easy. This type of edible is already a bit classier than your traditional muffin or brownie, but you can use design to take things a step further.

Imagine a sparkling coating of sprinkles and glitter on top of the mint-green frosting. It evokes the image of the shimmering trichomes of a flowering marijuana plant. It’s fresh, chic, and oh-so-beautiful.

Try these marijuana cupcakes, and you’ll never again settle for store-bought edibles. Cooking and decorating these treats is fun on its own. Then, once you bite into them, you’re setting off on a journey of unsurpassed enjoyment.

Have you learned how to make weed cupcakes yet? If so, be sure to leave a comment and share your experience with the community.

Stay tuned to our blog for guides on all things marijuana. Visit the seed store to find the perfect strain for a homemade cannabis oil batch and stop depending on dispensaries for your special desserts.