What Is Mid Grade Weed? 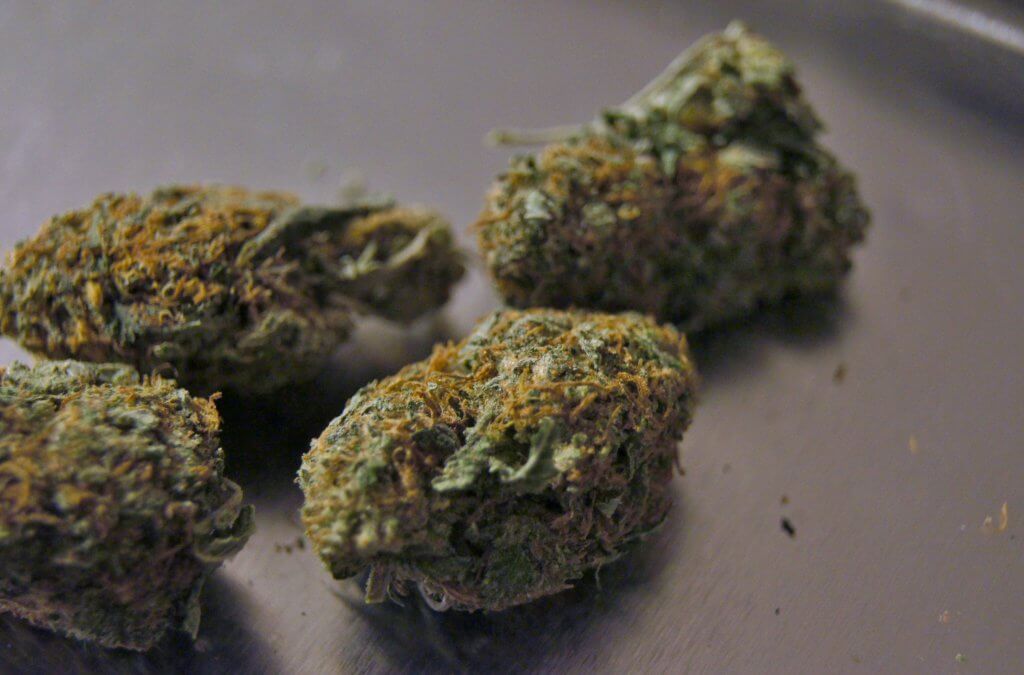 Have you ever heard about mid-grade weed? The term might be foreign to you if you’re a novice on the cannabis scene. But don’t fret. By the end of this article, you’ll understand all there is to know about the various marijuana types.

Cannabis typically falls into four categories: indica, sativa, hybrids, and ruderalis. Each of these has distinct properties and effects. However, there are further classifications, specifically referring to their quality.

Below we look at each of these and the position of mid-marijuana on the 420 scene. We also highlight the differences between them and provide you with tips on how to tell what kind of buds you’re buying.

Let’s kick things off by understanding the various types of marijuana.

The names and appearances of cannabis

Did you know marijuana’s ranked according to its quality? There are four classifications, but most tokers only rank them by three. These are:

There’s various terminology for each of them, but we’ll only mention a few in this review.

Let’s start by looking at the cheapest type of weed bud—reggie. If you’ve never heard of the term, don’t be alarmed, we’re going to break it down in the next section.

In regions where cannabis is prohibited, reggie weed strains are prevalent. It’s often the type of marijuana tokers start smoking when they’re new to the 420 scene. Those with more experience often refer to it as dirt weed, ditch weed, or schwag. The terms stem from the brownish appearance of these nugs.

Mid-grade weed is a step up in quality and comes with a price jump. As the name suggests, it’s the midpoint between premium and poor-quality marijuana. They’re usually green with a decent covering of trichomes. Mids offer tokers an option with value for money and enjoyable effects. They’re also called mids, middies, and other similar nicknames.

High-grade mid weed is quality cannabis that falls short of the premium level. These buds typically have an eye-catching appearance, and less experienced marijuana connoisseurs might mistake them for dank options. They’re vibrantly colored and often have glistening crystals.

Dank weed is the cream of the crop (literally if you consider resin to be cream). This marijuana is the most expensive weed option. These strains are the ones popularized by celebrities and enjoyed by those who only indulge in finer quality products.

It’s also called loud weed, as everything from the color and aromas to the effects and THC level are intense. The latter is sure to catch your attention when you compare buds of mids vs. louds, and smoking them induces an experience you won’t easily forget.

Let’s delve a bit deeper into each of these.

If you haven’t smoked reggie before, consider yourself lucky. It’s the lowest quality marijuana with an unimpressive profile. In some circles, starting with reggie weed strains is a right of passage, but if it’s a mind-blowing experience you’re after, skip it.

It’s a C-grade type of cannabis, and in previous years, mid marijuana fell part of this category. These nugs aren’t attracted, and their THC levels are low, averaging around 10%.

These cultivars exude peculiar odors of skunk, and the flavor leaves a lot to be desired, too. On the inhale, you’ll taste mostly grass or hay before the coughing fit hits. The effects also take a while to set in and often come with dizziness and nausea as side effects.

Cannabis cultivation requires diligence. If you neglect your crop and don’t employ proper growing practices, your bud quality drops, and you could end up with a reggie weed plant.

The first thing you notice about these buds is the dark color. They’re usually a dull green with hints of brown. They’re dry with plenty of seeds and stems. It looks as unappealing as it smells.

When you touch the buds, they’re dry and dusty, similar to grass cuttings. Squeeze too much, and they flake. Surely they must have some sticky resin or crystals to entice you, right? Nope! Reggie weed strains will have you wondering; what are trichomes?

What is mids weed (or mid-grade weed)?

Mid-grade weed is of average quality. If you’re looking to take your marijuana experience up a notch from reggie, try mids. These cultivars are grown from superior seeds and get better care during the growing process.

Do you know how to tell if a weed seed is good? It’s not easy, but using a reputable supplier is a good place to start. The prices might be higher, but at least your harvest will be mids or dank instead of reggie.

Mid marijuana buds have an eye-catching appearance, with some resin and trichomes. They contain more THC, with levels averaging around 16%, and offer discernable aromas too.

The fragrances vary from one strain to the next, but they’re quite aromatic. The effects are more impressive too. In previous years it got lumped together with reggie, but as cultivation techniques improved, mid-grade marijuana got better.

In regions where cannabis is prohibited and reggie is prevalent, tokers may mistake mid-range for dank weed. On the other hand, premium consumers who typically smoke the strongest strains of weed might classify mids as reggie.

These buds are ideal for when you want quality on a budget. Tokers often bust them out at parties as an affordable solution for larger groups.

Mids are quite similar to the luxury weed strains but fall a bit short in all quality categories. When we compare mids vs. dank bud appearance, it comes down to vibrancy.

The former boasts lovely shades of green, with some hairs that protrude and trichomes. Certain strains have resin too. There aren’t stems or seeds in these nugs, and they’re moderately dense.

Mid-grade marijuana is more aromatic than reggie, and the scents are pleasant and enticing. These fragrances intensify once you crush the buds but aren’t quite as powerful as those of dank weed. Each strain is different, but most have subtle earthy or wood notes that compliment the various flavors.

Thanks to the higher dose of THC in mid-grade weed, the effects hit after two or three puffs. They start gradually and intensify within half an hour. Initially, you feel a mild cerebral buzz that has you feeling happy and relaxed.

These sensations don’t last too long, but the potency is enough to have you feeling positive and calm. And, while they might have you feeling hungry and lazy, heavy couch-lock isn’t common.

What is loud weed (or dank weed)?

Loud weed strains set the standard. They’re the best of all cannabis. The buds are dense, bright and some strains have multi-colored hues. The seeds come from quality genetics, and the cultivation process is meticulous.

These plants mature in ideal conditions, with the correct temperature, humidity, and lighting. Cultivators use premium soil or organic mediums and minimal chemicals or pesticides. The biggest difference with mids vs. loud starts with cultivation.

They have excellent THC levels, with some reaching over 30%. Their aromas are sensational, and they boast delectable fragrances even before harvesting. Once crushed, your mouth waters in anticipation, and the scents are enough to get your taste buds tingling.

When you finally take a toke, it usually goes down smoothly. An array of flavors take your tongue on a tasty adventure. These change from the inhale to the exhale with three or four various notes blending.

The effects occur instantly, hitting you cerebrally and inducing utter euphoria. Loud weed strains last longer with more intense sensations. Indica options give you a burst of joy before wrapping you in delicious couch-locked. Sativa varieties bring about sudden energy and mental clarity.

Wondering what a loud weed strain looks like? Picture a fat dense bud that displays bright green hues with fine orange hairs and specks of purple and blue. There are no seeds or stems in these luxury buds, and they glisten in the light thanks to the many trichomes and thick coating of sticky resin.

How to tell the difference between mid and loud

When comparing mids vs. dank, it can be quite tricky. There are some subtle differences between the two when laid out side by side. The first is texture. Loud weed buds are dense, and mids are slightly airier. The former is also more sticky when touched, and some are resinous.

The colors are brighter on dank buds, and the trichome quantity is much higher. Mid-grade weed is bright and attractive but not as vibrant.

The higher quality variety doesn’t have any seeds or plant matter visible, whereas there may be a few stems in mids. The terpene profile is much higher on loud buds, and you can easily tell by the strong scents it gives off.

Take a whiff of each nug, and the one with the stronger scent is likely the dank one. This rule carries over to the flavor too. The tastier option that has a variety of complex flavors is superior. Mid-grade weed tastes great, too, but isn’t as flavorful.

Wondering about compounds? The THC level in middies weed is high enough to give you all the sensations you desire but doesn’t quite pack the punch the dank options do.

Mids effects hit after a couple of tokes with a warm mental buzz that induces positive feelings of euphoria, a mild case of the munchies, and some lazy sensations. The side effects aren’t too bad, especially if you keep hydrated.

Loud weed, on the other hand, hits quickly—and the cerebral rush is more intense. Multiple waves of euphoria wash over you, keeping you in a state of bliss. The effects last longer, and strong varieties leave you couch-locked and even sleepy.

If you’re looking for excellent marijuana at a lower cost, mid-grade weed is the way to go. The buds tick all the boxes cannabis lovers look for. You get gorgeous buds that smell fantastic and taste great too.

The effects are incredible and mimic those of dank strains. They’re ideal for sharing with a large group of friends at a social event. The psychoactive sensations are sufficient to get everyone buzzed without breaking the bank.

Now that you know the difference between dank, reggie, and middies weed, why not try to cultivate your own? Visit the Homegrown Cannabis Co. seed store and check out our wide selection. There’s sure to be something that gets your green fingers itching to cultivate.