Freezing Weed: Everything You Need to Know 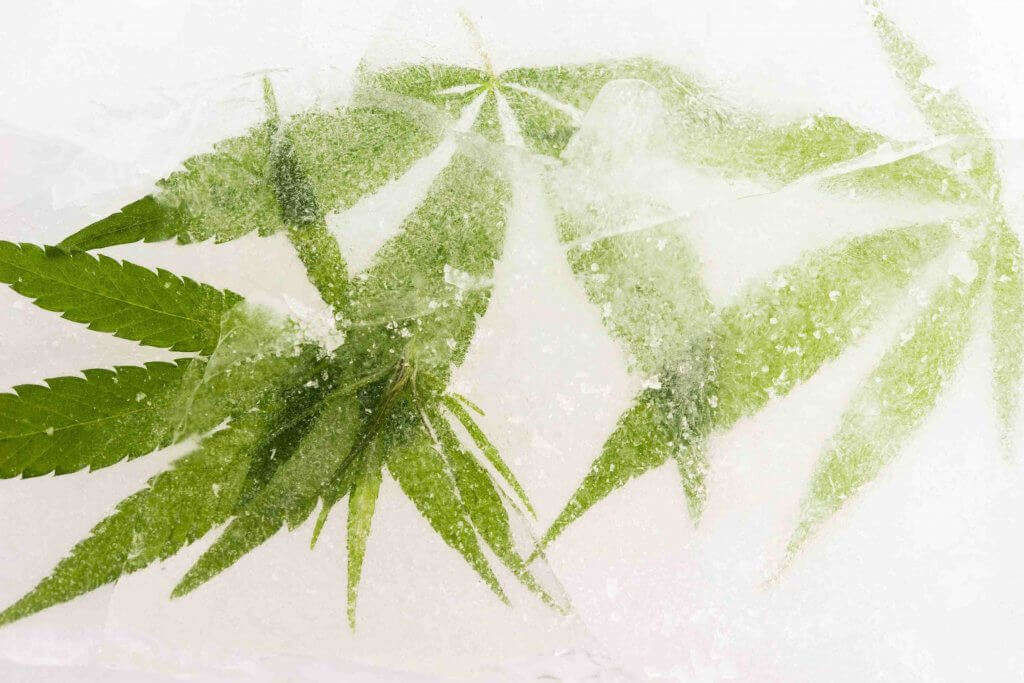 When you’re sitting with excess cannabis that needs storage, freezing weed is maybe at the top of your list. It isn’t a bad idea but is freezing the best storage choice for your marijuana?

Dried and cured cannabis needs careful packaging and storing facilities to ensure that flavors, scents, and cannabinoids aren’t lost. Consider some factors before putting weed in the freezer,

Five key points that affect your storage options are:

Make sure that all your decarboxylating efforts don’t go to waste. Storing your cannabis in the best way is beneficial to you and your weed. Below we’ll find out if freezing marijuana is one of them.

Can you freeze weed?

Yes, you can freeze cannabis, but it isn’t the best option to increase the weed’s shelf life.

Cured marijuana prefers dark and cool conditions but not below zero temperatures. The weeds’ quality deteriorates, leaving you with nothing but cold dried-out nugs.

As mentioned before, five factors are essential in determining whether freezing marijuana is favorable.

Cultivators from all spheres would agree that giving your cannabis crops light during cultivation is vital for them to thrive. Strangely, this doesn’t work for cured weed. When storing your marijuana, don’t expose it to any light, direct sunlight, or artificial.

Blocking out UVB light from your stash prevents THC breakdown.

When freezing marijuana, you won’t have much control over the humidity that surrounds your nugs. Too little humidity in storage spaces dries out the air causing trichomes on the nugs to degrade—resulting in the loss of cannabinoids, smells, and flavors.

A comfortable temperature for storage is an average of 68℉, and not more than 77℉. If the environment is too hot, it causes the buds to dry out. If it’s too cold, like putting weed in the freezer, it damages the trichomes.

The air in a freezer is too cold and will delay the decarboxylation process in the buds.

Preventing oxidation from taking place inside your storage container is vital. Exposing cured nugs to too much oxygen degrades them faster. Use a jar that perfectly fits your weed stash to avoid leaving extra space for oxygen to accumulate.

Trichomes on cannabis buds are fragile, and vigorous movements can damage them. Avoid storage where your weed doesn’t experience much friction. Losing too many trichomes will leave your nugs without any THC properties and little to no flavors.

What happens if you freeze weed?

What happens when you freeze weed? Exposing trichomes on your nugs to extreme cold temperatures causes them to become brittle and damaged. Having frozen trichomes increases the possibility of friction that could result in them breaking off.

Freezing cannabis slows down the decarboxylation of cured weed, losing its potency, flavors, and aroma.

Putting weed in the freezer creates ice crystals on the buds, making them susceptible to mold and mildew.

How do you freeze-dry buds?

Freeze-drying your cannabis is a moderate dehydration process used by growers to preserve the quality of their weed. This process maintains more cannabinoids in the weed than any other process.

Three factors that uphold the process are:

A vital stage in the process involves rapidly freezing the marijuana at a temperature of -40℉ to avoid ice crystals from developing. You can drop the degrees below 40—more cold means fresher product.

Sublimation turns solid ice straight into a vapor that’s sucked up by a vacuum pump.

Also known as the final drying stage, it can take up to 2 days to complete. It removes approximately 95% of the water in freeze-dried cannabis and returns the buds to room temperature.

Drying your cannabis the traditional way by hanging it takes longer than freeze-drying. Let’s take a closer look at the difference between the two drying methods:

Both methods are optimal choices, but freeze-drying is the one that maintains the look of the nugs as if you just picked them.

Reasons why you should not be freezing weed

Putting your cannabis buds into extreme cold temperatures doesn’t safeguard its cannabinoids and terpenes. It results in lower THC levels and fewer flavors and aromas. Putting weed in the freezer creates the perfect platform for other concerns to arise like:

The temperatures on some freezers aren’t regular. If your packaging isn’t airtight, the excessive oxygen exposure causes the buds to become freezer-burned. If the air is too warm that it causes humidity inside the bag or container, your weed will rot.

Fluctuating temperatures create a breeding ground for pathogens, mold, and mildew to develop on cannabis.

The trichomes on your cannabis nugs are the gatekeeper between you and the effects you feel from your weed. Freezing your marijuana damages these crystal coatings on your buds, resulting in a weaker and flavorless toke.

Decarboxylation is a drying process that marijuana buds undergo to activate psychoactive properties like THC. When you store weed in the freezer, this process slows down, resulting in less THC in the nugs.

When can you put weed in the freezer?

The need for authentic, high THC cannabis tinctures in vape pens is pushing a trend of “fresh frozen.” In this case, freezing marijuana is optimal because it’s done on a much larger scale, using industrial machinery.

So when can you put weed in the freezer?

What is live resin?

In this case, you can store weed in a freezer. Shortly after harvesting the crops, the process begins. Use a vacuum to seal the resinous buds in plastic bags after removing the leaves, branches, and stems.

Placing the bags in industrial freezers at temperatures ranging from -38℉ locks in all the cannabinoids and terpenes. Within 24–36 hours, you can remove the frozen weed from the freezer and prepare it for the extraction process.

Before packing the frosty buds into steel tubes, they need to be ground. The particles are blasted with a solvent to draw out cannabinoids and terpenes, while crystallized water separates from plant matter.

When removing impure solvents, it leaves behind a cold, golden fluid called live resin. This liquid is used in modern toking devices like cannabis vape pens.

Taking “freezing marijuana” to a whole new level—making ice hash is a simple process even beginners can enjoy.

It’s a nonsolvent cannabis concentrate that uses the process of dipping buds into water filled with ice. The main aim is to separate the trichomes from the nugs.

Sift the liquid using different grades of fine mesh to separate the trichome heads from other plant materials. The quality of weed used determines the size of the mesh that you can use. If you want to isolate the top glands of the trichomes, it’s best to use 20–40 micron mesh.

Let’s discuss how to make this frozen weed:

Once your ice hash has dried, you can enjoy your frozen weed! Remember, the colder your water is while stirring, the faster the trichomes heads will freeze and break off. Bringing with it the best of its THC and terpene qualities.

Whether you’re a novice or experienced toker, you know that leaving your weed out in the open isn’t advised. You’re not sure if you want to freeze your dried marijuana, but you know that it needs to go in a dark, cool place with low humidity.

Considering the above, using an airtight glass container is the best storage option. This way, your oxygen and humidity levels are on point, and the temperature remains consistent below 77℉.

The primary concern for storage is maintaining the quality and potency of your stash.

When storing cured weed in the right conditions, it can last six months to a year before losing its favored qualities. Based on research, it loses up to 16% THC when stored for a year and continues as time goes on:

You can’t prevent this loss, however, you can preserve their best qualities using the right storage.

The best way to store your stash, other than putting your weed in the freezer, is:

In an airtight glass container

Getting rid of plastic bags, even the zip lock kind, is the best thing you can do for your pot. Plastic fibers contain static that is bad for the trichomes on your buds. Ever noticed how your weed is stuck to the bag sometimes? It also disrupts the potency of the nugs.

The same goes for metal tins—too much oxygen enters the container.

Using glass jars with airtight lids is your best bet and will ensure you have potent weed for days.

Once you’ve filled your jar with stash, place it in a cool, dark space.

The storage space mustn’t be too cold either, which is why you shouldn’t be freezing marijuana. Keep your weed in a cupboard and make sure temperatures never exceed 77℉.

Avoiding sunlight exposure to your cured weed is as vital as selecting the right container. Any form of light creates heat that holds moisture, causing mold to develop.

How do you know if your weed is old:

Is freezing marijuana worth losing its potency? All frozen things should last longer. In this case, it doesn’t. Instead, it leaves you with flavorless weed and no euphoric sensations.

Given all the reasons why we shouldn’t be putting weed in the freezer, we can’t help but admire how cannabis vape juice is made. The future of drying weed is here—alongside the traditional methods.

Choose the right storage for your stash by considering the five essential key points, and you won’t get it wrong.

Let there be no light—keep your stash in the dark. Keep the temperatures low, but not “weed in freezer” low. Watch out for too much humidity—you don’t want rotten pot. Fill up all the space in your jar to avoid oxygen buildup. Protect your trichomes and don’t allow friction.

Use that mason jar with the airtight lid, and know that you’ll have a stash that’s safely packed away for your next toke.

Head over to the Homegrown Cannabis Co. seed store and select your weed that you won’t be freezing once harvested.