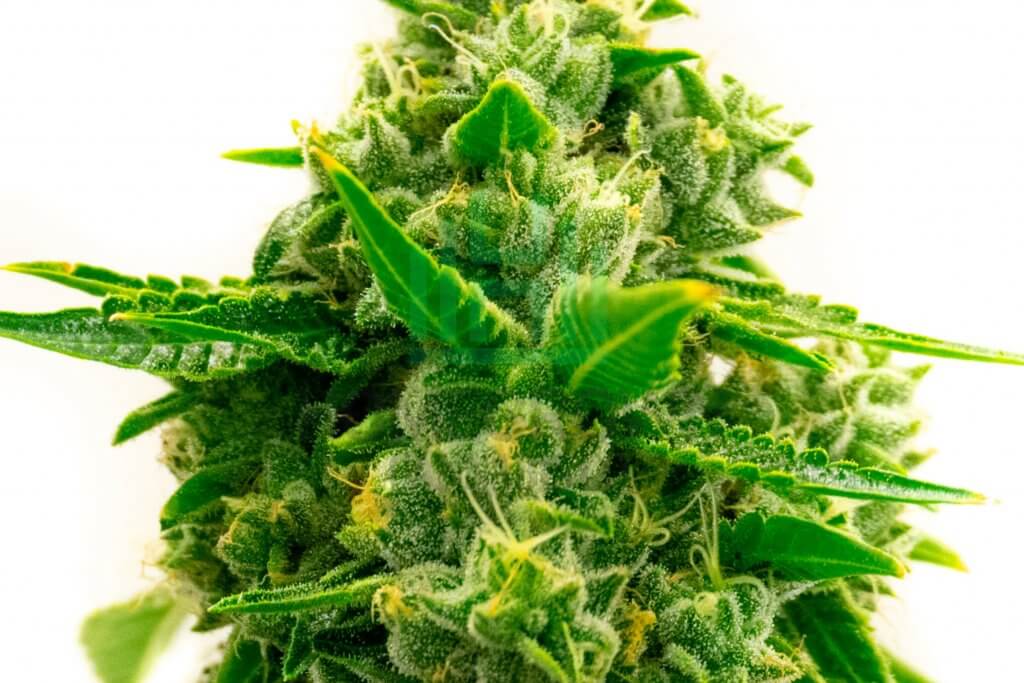 With THC levels as high as 32%, Bruce Banner Fast Version is one of the most potent weed strains ever created. Its massive buds are lathered with insane amounts of trichomes, and one glance tells you it’s NOT for the faint of heart. But why is it called a Fast Version? Does that mean it’s autoflowering? Or just quicker in flower? Does it still yield well? Does it taste as good? This article will answer all these questions and more as we take a look at what is so amazing about Bruce Banner: Fast Version.

Bruce Banner owes its impressive traits to an elite lineage of OG Kush and Strawberry Diesel.

Strawberry Diesel is no-doubt the reason behind Banner’s sativa-style, cerebral rush, but it can also be blamed for the tantalizing aroma: fruit-scented and diesel-flavored. This is a damn tasty way to enjoy a high-octane, jet-fueled buzz.

Bruce Banner Fast Version seeds are NOT autoflowering, but they are perfect for growers who want an early harvest without compromising the quality and quantity of the yield.

Ahem, absolutely it is! Bruce Banner Fast Version can possess THC levels up to 32%. This is potent weed even for well-seasoned tokers. It’s often referred to as a one-hit wonder, but not because the high is short-lived. It’s because one hit is often all it takes to deliver the wide-eyed, wonderful high.

With this Bruce Banner, it’s not only the flowering that’s fast. You’re high almost before the joint, bowl or bong has left your lips. Some people feel high just thinking about Bruce Banner – even writing this article is making me feel a little bit buzzed! With both original banner and the fast version, the euphoria comes first, plastering a big, bright smile across the face. Next come the teeth-clenchy giggles and surges of creative expression. This is mental energy, focused and productive, but not for long.

As the high peaks, it mellows into a relaxing sensation that gradually spreads from the neck down to the tips of fingers and toes. It begins as a mild tingle you probably think is from laughing too hard, but soon transitions into a heavy sedation, relaxing every single muscle in your body. Stress fades, noises seemed muffled and cushioned, and thoughts turn to dreams as your mind is overtaken by peaceful sleep.

Is Bruce Banner high in CBD?

Most people use Bruce Banner Fast Version for recreational purposes, as it’s rather low in CBD (1%). But the medicinal potential of Bruce Banner should not be overlooked. That 32% THC level makes BBFV an amazing analgesic, as well as an enjoyable way to fight both stress and insomnia. The rich terpene profile, however, means it’s far more than just a sleepy painkiller.

Many medical marijuana patients use Bruce Banner as an alternative to prescription medications, especially ones for mental health issues like depression, anxiety, and PTSD. The euphoric high and mood-enhancing effects have seen Banner used as an anti-depressant and mood stabilizer, while its calming, anxiolytic properties can help people put worries into perspective.

Banner’s Indica side is likely responsible for the incredible analgesic and anti-inflammatory properties. Just a few tokes of this potent strain has potential to alleviate chronic pain, migraine, muscle spasms, fatigue, stress and inflammatory disorders such as arthritis and Chron’s disease.

The abundance of terpenes not only makes Brucey B tasty and fragrant, but it really boosts the medicinal properties. The heavy presence of caryophyllene, a-humulene and b-pinene forms a major part of the anti-inflammatory entourage effect. Limonene and linalool, also present in Bruce Banner, are calming terpenes known to provide lasting relief from anxiety and stress. Finally, the presence of myrcene goes a long way to explaining why Bruce Banner shows some antiseptic, anti-bacterial and anti-fungal qualities.

In short, while the Bruce Banner is low in CBD, there are plenty of reasons why it’s still an extremely popular high-THC medical marijuana strain.

A grow tent full of heavy, flowering Bruce Banners smells like a freshly-blended diesel, kerosene, strawberry and mixed herb smoothie. Not the sort of thing you want to see on the menu at Jamba Juice, but cannabis connoisseurs will LOVE it. When your Banner is harvested and cured, these same smells thicken but take on added earthiness, a sprinkle of shaved truffles that adds depth to the aroma, especially in the blaze.

Whether you roll it up or pack a bowl or bong, once you start combusting your big, Brucey nuggs you’re in for some super-sweet treats. Fresh strawberries caramelize, the fuelly notes are spent entirely on the inhale, tasting dank and earthy on the way out. Mushrooms and herbs coalesce and the flavors linger on the tongue for hours after the bowl stops glowing, a delicious reminder of a unique tasting sensation.

Bringing up a Banner

When growing indoors, be sure to keep the environment as optimal as possible. One way to do that is to maintain a temperature of 70 to 79°F (21 to 26°C) and relative humidity levels adjusted for the stages of growth. Prune dead leaves and manicure the dense foliage to keep the airflow optimum. This helps prevent the build up of mold and mildew, especially during flower.

Both the Screen of Green and Sea of Green methods really suit Bruce Banner Fast Version, maximizing space, light exposure and the plant’s productive capacity. Under a high-quality 600 watt HPS/LED, growers can expect 15 to 21 ounces of monstrously huge buds after a very quick flowering period of 6 to 7 weeks.

When grown under full, Mediterranean sun, Bruce Banner Fast Version can really reach its full potential. It loves warm sun, low humidity and enriched organic soil… grown in these conditions (with no mistakes), you could well hit 22 ounces per plant!

They say good things come to those who wait, but also to those who don’t. Bruce Banner Fast Version is no different from standard BB in terms of yield and cultivation requirements. The only real difference is the 6 to 7 week flowering time. For impatient growers, this is a win-win, a no-brainer, an absolute must-have feminized cannabis strain.

For newbie growers, if you follow these germination guidelines, popping your feminized seeds is both easy and guaranteed to succeed. You might want to wait until you have a little growing experience before trying this fast version, however, as it grows quickly and it grows tall. For a first-time grow and an easy intro into the Banner family, we highly recommend Bruce Banner Autoflowering –big yields, hassle-free.

« The Best Places to Grow Cannabis Outdoors
What is Supercropping? »