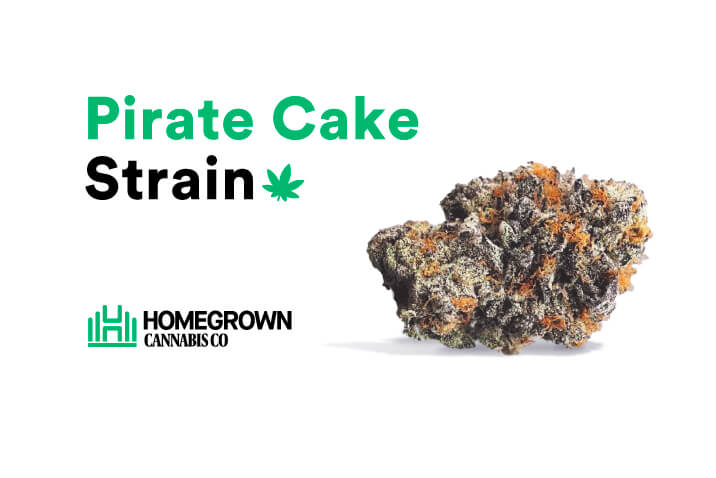 Pirate Cake strain is a rare indica cross between the popular Wedding Cake and uncommon Kush Mint. It’s guaranteed to launch you into calm waters with a therapeutic, deeply relaxing, and long-lasting stone. Give your mind and body a break as you unwind after a stressful day.

Recreational users love Pirate Cake weed. However, there’s no need to sail the high seas to enjoy its goodness because this THC dominant (22%) strain’s easy to grow.

Its exotic nature means you’ll have something unique when you share the aromatic Pirate Cake weed with yer mateys. Raise your jolly roger and swab the deck as we explore what this savory treat has to offer.

Pirate Cake strain is beautifully fragrant and delicious. Despite having high THC, its buzz isn’t overbearing, but it lasts for what seems like an eternity. This treasure trove of sweetness gets you rolling on the deck laughing, then chilled throughout the rest of the voyage.

Here are its specifications:

The Pirate Cake weed strain is a top pick for working wellness users because while it may not be a heavy hitter, its effects last for ages. Use Pirate Cake weed on a chilled weekend. Relax on the couch and rewatch hours of your favorite sitcom. The fast onset of euphoria slowly transitions to a sedated sense of couch-lock and sleepiness.

Pirate Cake weed hardly ever makes you anxious. It leaves you in a good mood, with relaxed thoughts. No coasting into a weird and uncomfortable introspective zone where you start to question everything and anything.

Wellness applications of the Pirate Cake strain include relief from muscle pains, arthritis, migraines, and insomnia. Some users report experiencing dry eyes while enjoying this dank delight. Minimize this slight discomfort by hydrating and using eye drops during and after the session. Pirate Cake weed doesn’t offset munchies, unlike many other marijuana strains.

Open up a bag or jar containing Pirate Cake weed and soak in the skunky and celery-like aroma. You can also smell notes of fresh green herbs, sweet tropical fruits, and cheese on the back end. The aroma travels—not so great if you want to be discreet.

Light up Pirate Cake strain buds to experience a sweet berry and earthy aroma fill up your room. The smoke also has a light, gassy fume, and some skunk. Create a hotbox— it’s the perfect accompaniment to the relaxing effect.

The aromas are congruent with the taste, but the herbal notes morph into a dry spice tang that lingers on the palate. A bong or vape hit fills your mouth with a thick, funky, sweet, and minty fresh fruit flavor.

This cultivar grows short and bushy like an indica yet exhibits narrow leaves and loosely packed buds similar to sativas. You can expect Pirate Cake to finish flowering in 8–10 weeks, offering an average yield.

The snow-covered buds are dense, with a little spring to them. A heavy crystal coating makes the Pirate Cake weed strain ideal for making hash. Beginner cultivators shouldn’t find it difficult to produce beautiful and potent buds.

Pirate Cake strain cultivars have an easy-going nature—not surprising, considering that’s just how its parents are. Grow it indoors or outdoors in a temperate, continental, sunny, or Mediterranean climate.

You can stink up the whole block as the plant exudes a rich, tropical fruity aroma while flowering. Install carbon filters in your grow room for confidentiality.

The Pirate Cake strain may be an indica dominant hybrid, but the sativa side also shows in its effects and plant characteristics. This potent cocktail is a cross of Wedding Cake and Kush Mint. It’s hard to find but very much sought after.

Wedding Cake renders a rich tangy, sweet, earth, and peppery flavor. Kush Mint is a potent, evenly balanced hybrid that relaxes both mind and body, passing on similar attributes to the Pirate Cake. It also lumps its earthy, sweet, and spicy coffee-like taste with a heavy kick of mint.

Pirate Cake strain seeds to buy near you

Look no further than Homegrown Cannabis Co. for this gem, or any other marijuana seeds for that matter. We offer lots of perks, such as discreet and prompt shipping.

Cultivating Pirate Cake weed gives you the chance of getting a novelty strain to wow your friends. Unfortunately, it’s not in stock right now, but you can try out its parents for a similar experience.

Unearth the Pirate Cake strain for its enticing, fruity aroma and potent, relaxing buzz. Lighten up your mood and feel free like a pirate cruising in the high seas. Blue sky above, blue ocean below, and no problems.

The effect starts a little spacey and slowly transitions to a long-lasting repose, leaving you slightly groggy but still in control of your thoughts. It’s a smooth sailing experience cultivating Pirate Cake weed strain plants, even for beginners.

Join Pirate Cake Homegrown Diary for honest and informed opinions on cultivating this stellar strain. It’s good to have a helping hand. Subscribe to Homegrown Diaries to track your grow like a pro, and don’t forget to join Homegrown Forum to connect and engage with other cultivators.