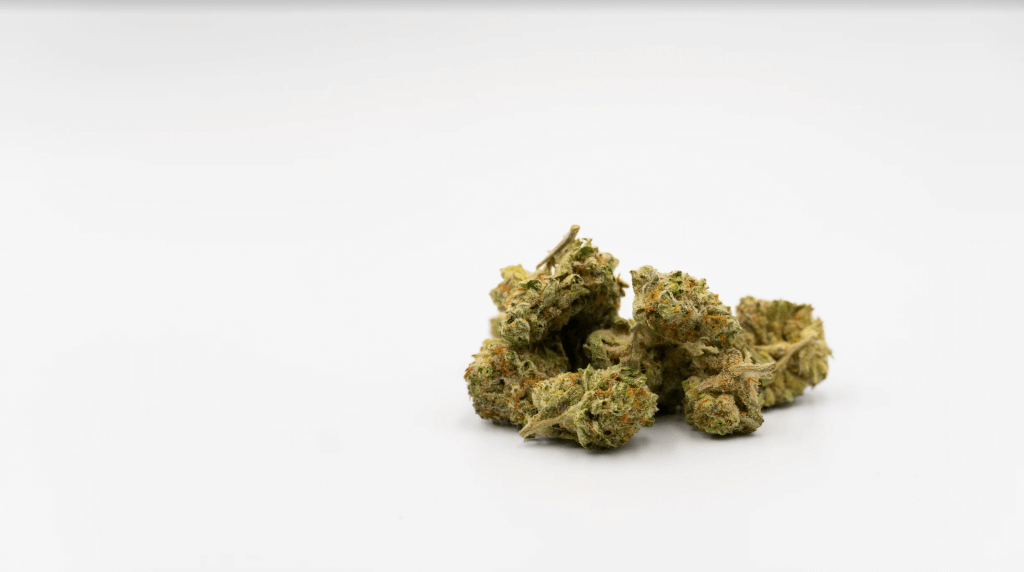 A legendary North California strain and a Humboldt masterpiece.  Trainwreck drives a euphoric high and energizing effects that make it perfect for a daytime smoke but be careful, it’s punch and power is infamous. Trainwreck offers users a powerful dose of cannabinoids and terpenes and is a hugely popular medical strain, with first-class anxiolytic properties and full-body relaxation. The strain provides growers with a hardy and low-maintenance grow and tokers with an earthy, piney, and sweet aroma.

The Train wreck strain is recognized as a three-way hybrid cross of landrace strains; two Mexican and Thai Sativas and an Afghani Indica.  It boasts a high THC content of between 12 and 25% and Trainwreck buds have a 65% Sativa to 35% Indica leaning.

The Trainwreck effects crash in with a non-stop express surge of intense euphoria and an almost narcotic, psychedelic high.  Many users are energized by the trainwreck marijuana strain and are able to maintain focus and get jobs done.  The clear-headed buzz allows creative ideas and inspiration to flash into the mind as buildings flash past a train’s windows. Potentially overwhelming in anything but moderate doses, even to experienced users, Trainwreck cannabis should carry a warning notice proclaiming “Newbies Beware”!

After the initial high-speed rush, a deep bodily relaxation sets in, but it doesn’t take the edge off productivity and the natural upbeat feeling users often experience.  In moderation, you’re unlikely to feel lethargic and lazy.  However, in larger doses, your 2-3 hour journey could also end at the couch-lock city, thanks to the powerful sedative effects of Trainwreck marijuana’s Indica content.

Trainwreck oozes a dank, earthy, and woody-pine scent with citrus fruit notes and a hint of menthol.  When smoked, the flavor is true to its aroma and presents lemon notes and a sweet-spicy aftertaste.  The touch of sweetness makes for a very pleasant smoking or vaping experience. Trainwreck’s terpene profile is a high concentration of terpinolene, limonene, and myrcene. Limonene lends the sharp and tart citrus flavors, Myrcene the earthy and musky qualities, while Terpinolene offers more complex undertones of pine and herbs.

What is the Train wreck Strain Good for?

Trainwreck’s medicinal uses largely revolve around the strain’s energizing and uplifting characteristics and incredible mental stimulation.  The stress-busting euphoria it provides may offer benefits to those suffering from depression, anxiety, and other health concerns including Post-traumatic stress disorder (PTSD) and Attention Deficit Hyperactivity Disorder (ADHD).

It could possibly distract from physical discomforts and even with the strain’s relatively low CBD content it has proven to be very effective in the battle against chronic pain.  It is a powerful relaxant and can help to ease muscle spasms and similar conditions. If used wisely, lower doses could be a great help in boosting energy and battling fatigue.  Increased focus and motivation can also be accompanied by a creative boost.

The Trainwreck strain thrives both indoors and outside, and is a sturdy, hardy plant, thanks to it’s Afghani ‘roots’.  A relatively easy plant to grow, even newbie gardeners should find this a doddle.  Using the Screen of Green (SCROG) method training technique is the ideal method to stimulate maximum growth. Trainwreck performs best in warm environments with an ideal temperature of around 69-80F (20-27C).   Whether you’re growing Trainwreck indoors or outdoors, keep it fed with nutrients and prune it regularly.

How Tall will the Trainwreck Strain Grow?

A very good question if stealth is one of your concerns because you won’t want Trainwreck flowering in full view of passers-by, no matter if your grow is legal or not.

Trainwreck can grow quite tall, thanks to it’s thick, sturdy stems and while it only reaches 4-5ft indoors, outdoors it can top out at an average 7-8ft, with reports of some plants even reaching 10ft.  Now, that’s a difficult plant to hide!

In a controlled, well fed and maintained hydroponics setup, you can have Trainwreck flowering at anywhere between 8-10 weeks.  On average, it will produce 1.6-2.3oz of buds per square foot.

Growing Trainwreck outdoors can prove to be a lengthier process, with it being ready to harvest around late October to early November.  The results can be stupendous, however, with the attentive grower reaping rewards as high as 25-28oz per plant!

The Origins of the Trainwreck Strain

As with many cannabis strains, the exact origins of Trainwreck are entwined with legend and weed-lore.  Popular myth has it that around 40-50 years ago two brothers had an illegal grow going, hidden deep in the Emerald Triangle of Humbolt County, near to the idyllic, bay-side city of Arcata, California.

Away from prying eyes, the brothers had cultivated a three-way crossed cannabis hybrid with wonderful properties and the crop was their pride and joy.  However, one night a freight train derailed and there was a devastating crash.  Emergency services were called and the brothers, whose secret grow was close to the tracks, immediately knew that they had a big problem on their hands.

As the flashing of emergency services’ lights lit up the night sky, the brothers went about their heartbreaking work, destroying all but one of their perfect and precious plants, in order to avoid discovery and prosecution.

Clones of the sole, surviving plant were distributed and somehow made their way into the eager hands of California’s breeders.  The mother plant was christened Trainwreck and in the resulting Trainwreck strain, a world-wide legend was born.