How To Get Rid Of Fungus Gnats In Cannabis Plants 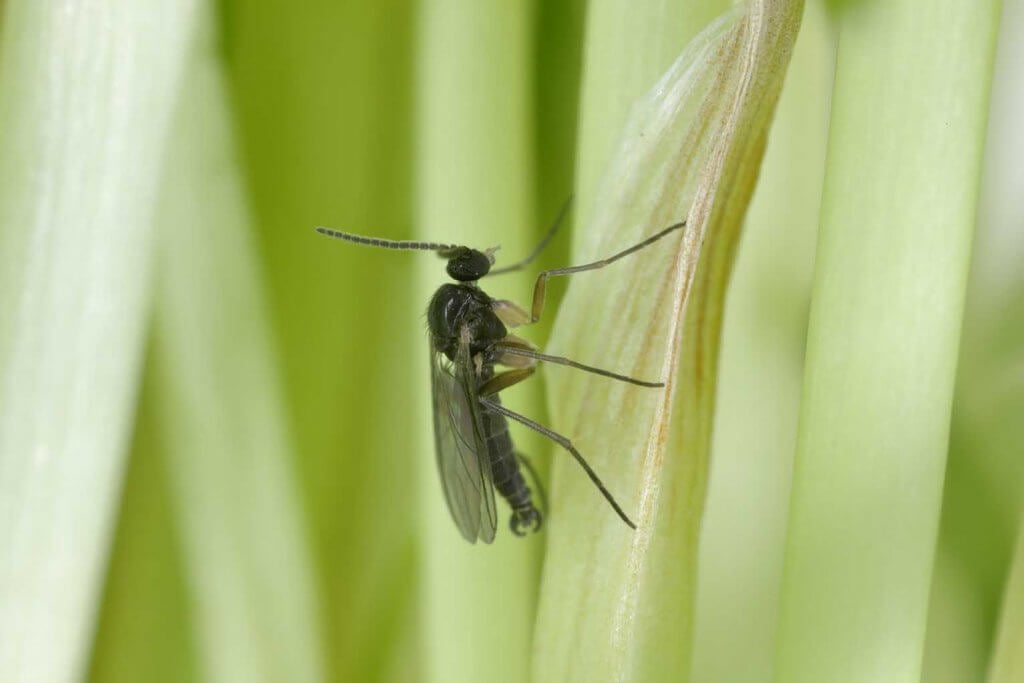 Like us humans, a variety of pests can’t get enough of the yummy taste of marijuana. Unlike us, however, they don’t have the courtesy to allow the plant to finish flowering before tucking in. Fungus gnats on cannabis are one of these headaches which can spell disaster for home crops.

Their minuscule size means they can squeeze into the smallest of spaces, invading grow tents and rooms to feast on your hard work. An infestation can quickly cause poorly weed plants, less than impressive yields, and in some cases, be fatal for your pot.

To protect your marijuana, you must put in preventative measures and learn to identify fungus gnat symptoms. Armed with this knowledge, you’ll be able to jump into action and stop these unwanted visitors from causing any long-term damage.

Read our comprehensive guide below for more information on how to get rid of fungus gnats in cannabis crops. We’ll explore why these critters consider weed top real estate, how you can avoid them pitching a tent, and what to do when it’s too late.

What are fungus gnats?

Adults, unlike many other cannabis pests, don’t care for chowing down on foliage. At this stage, they feed rarely and only on liquids. Instead, it’s the larvae that cause all the terror as they gnaw down on roots. Since the root system is critical for plant health, the damage causes a chain reaction of detrimental effects.

Most mature plants have strong roots allowing them to withstand the onslaught of cannabis gnats so long as the infestation isn’t too large. However, if these pests are left to run riot around young plants and seedlings, it can spell catastrophe for the entire crop.

Cannabis fungus gnats are tiny creatures at around 2mm long and no bigger than a dime when fully grown. They’re dark-colored, with transparent wings, and look very similar to mosquitoes.

Larvae are a little larger, growing to around ¼ of an inch in length. They’re easy to identify with a shiny black head and creamy colored, almost see-through bodies.

How long do fungus gnats live?

Cannabis gnats have a short and fast life cycle lasting between 18 to 30 days in total. Moist, fertile soil is the perfect breeding ground for females who can lay up to 300 eggs, and it only takes less than a week for them to hatch into larvae.

After two weeks of gorging on decaying plant matter and mulch in the soil, the maggots begin to pupate. No more than seven days later, the pupal stage ends, and now fully mature fungus gnats on weed continue the cycle by reproducing the next generation.

Due to their speedy lifetime and ability to produce hundreds of offspring, fungus gnats on cannabis can multiply in the blink of an eye. It’s possible for generations of gnats to be living in your weed before the first month of invasion is out.

What do fungus gnats do to plants?

As mentioned previously, adult fungus gnats on cannabis don’t pose any threat to your plants other than laying eggs that hatch into ravenous larvae. As soon as they emerge, the maggots begin a feeding frenzy devouring anything edible in the soil, including your weed’s root system.

What do fungus gnats do to plants? Once the picnic on your pot’s roots starts, your plants’ health will take a major hit, and if left untreated, these pests are often lethal.

Without a healthy root system, marijuana can’t absorb the nutrients or water it needs leading to cannabis deficiencies. Growth slows down to a halt, and before long, your cannabis will struggle to survive.

Fungus gnat maggots clog up the soil with their waste making drainage difficult. The conditions are ideal for them as saturated soil encourages faster decay and, therefore, even more food for larvae.

How to identify fungus gnats on cannabis

Spotting gnats in your grow room or tent is easy once you know the tell-tale signs that they’ve decided to squat in your crop. Keep your eyes peeled for:

Gnats on cannabis look very similar and are often mistaken for fruit flies. There are some small differences in their appearance, which can help you tell them apart. For instance, the latter are pale brown while cannabis gnats are black.

If your growing space is clean, but you’re still surrounded by tiny flies, then the only thing drawing them in must be the soil—a clear signal that they’re marijuana fungus gnats and not fruit flies.

What are the fungus gnat symptoms in your plant?

It’s critical you learn fungus gnat symptoms so that when they come knocking, you can use effective and appropriate pest control measures to protect your weed.

Symptoms of fungus gnats on cannabis include:

Fungus Gnats love humid and moist conditions where there’ll be plenty of decaying organic matter for their young to feed on in the soil. Marijuana grow spaces provide the perfect climate and plenty of dirt for them to lay eggs in.

Novice cultivators are more prone to experiencing gnats in their grow tent setup than veterans are due to inexperience with watering schedules. Overwatered media promotes decay and fungus growth, otherwise known as a feast for gnats on marijuana.

If cannabis fungus gnats only consumed decaying matter within the soil, they wouldn’t be overly troublesome, barring their waste clogging up the drainage. However, tender roots also get caught in the crossfire, especially thin hair roots of young plants wreaking havoc on your plant’s health.

As we now understand, finding gnats in your grow room or tent means your cannabis is under attack. Seedlings and young plants struggle to withstand larvae tucking into their roots and quickly show signs of stress before withering and dying.

Cannabis gnats on older plants cause nutrient deficiencies that also impact the long-term health of your weed and its yielding capabilities.

Adult gnats may not have a hunger for your marijuana, but they can spread diseases as they jump between plants in your crop. Pythium is carried on their minuscule feet and is one of the primary causes of root rot.

An invasion of fungus gnats during flowering is a big problem for your overall yield. The root damage that gnat larvae leave in their wake has a detrimental effect on plant growth.

Unhealthy cannabis roots cannot uptake the nutrients and water your weed needs to thrive during flowering. As a result, bud development is stunted, rewarding your hard work with less than impressive crops of small nugs.

How to get rid of gnats in cannabis plants

As soon as you spot signs of fungus gnats around your crop, you need to take immediate action. Read on to learn how to get rid of gnats in your grow tent or room.

How to get rid of gnats in grow room

Thankfully there are many weapons available for your arsenal in the war against gnats on cannabis. Next time you see an unwanted visitor, use our guide on how to get rid of gnats in your grow room or tent below.

How to prevent fungus gnats?

Once fungus gnats on cannabis have moved in, it can be a real challenge to get them to leave again. Their fast reproduction rate can make breaking their life cycle a serious headache.

As you set up your grow space, put in the following pest preventative measures, so the door is closed to gnats in your grow tent from day one.

Between watering, you should always let the soil partially dry out. Do the lift test to get a feel for how much your weed needs, and only ever provide what your pot can absorb in a few hours.

Fungus gnats on cannabis can be a nightmare for cultivators. Unlike many other pests, their destruction is below the surface. However, this doesn’t make it any less serious; it can be even more lethal in the case of younger plants. When fungus gnats during flowering are left to rule the crop, you’re certain to face disappointment the day it comes to harvest.

Next time you see an intruder, you know exactly how to fight back. Use your new knowledge on how to get rid of fungus gnats in your grow room. For an extra layer of defense, be sure to set up preventative measures and use your new skill in identifying fungus gnats regularly while you monitor your marijuana.

Fungus gnats on cannabis are only one of many pests hungry for your pot. Learn how to keep your weed safe alongside other tips and tricks to home growing here in our blog.

« How Much Does it Cost to Grow Weed? Costs & Savings of Growing
Chemdawg Strain Information & Review »