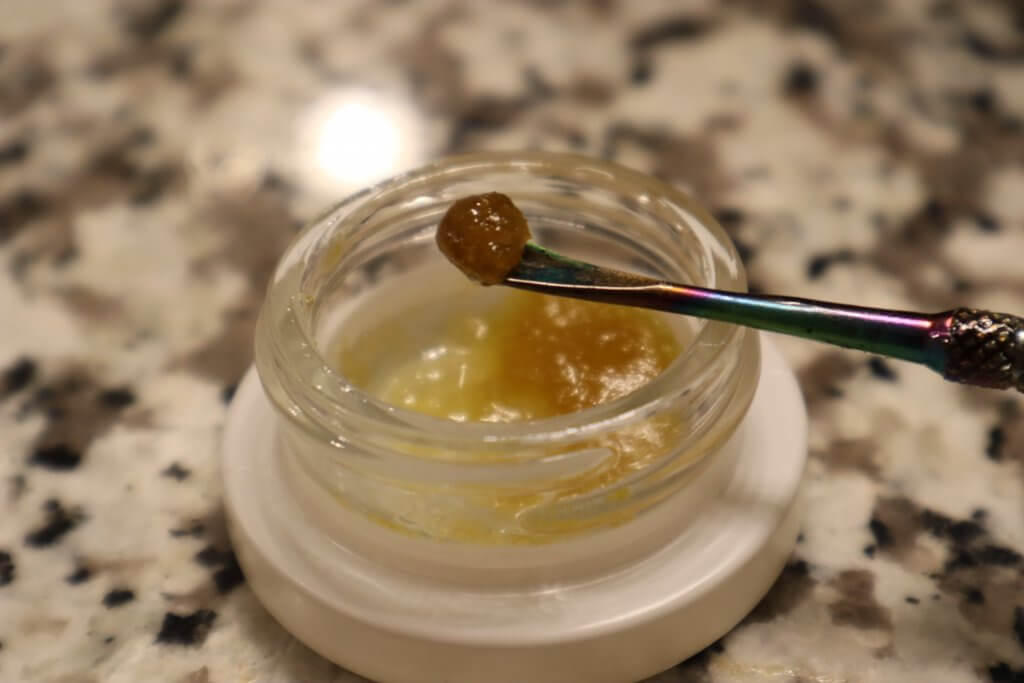 In the past few years, the innovation on how cannabis is consumed has extended past old-school joints and bowls of marijuana flowers. Today, users get to taste newer and more creative ways of consuming cannabis. We have discussed live rosin previously, but today we will discuss something a little bit different: Live Resin vs Cured Resin.

Lately, there has been a buzz on the emergence of live resin as well as debates on whether it’s the better version of the cured resin, a traditional method of preserving cannabis.

A general confusion on the true nature and difference between the two types of cannabis concentration technique exists. For some reason, neither was comprehensively discussed, at least for the pleasure of consumers.

To shed some light, here is a breakdown of the nature of cured resin vs live resin, their unique effects profile, differences, and more.

Similar to live resin, the cured resin also uses the cannabis plant’s resin to yield a cannabis concentrate. A resin or a sap refers to the sticky microscopic-looking protuberances on the cannabis plant called the trichomes.

The trichomes house several important cannabis compounds, such as cannabinoids and terpenes.

Two of the major cannabinoids in cannabis, CBD (cannabidiol) and THC (tetrahydrocannabinol), other minor cannabinoids, and important terpenes such as myrcene and linalool, can be extracted from cannabis because of its plant part. For this reason, trichomes are prized for their medicinal and recreational benefits.

Trichomes are part of cannabis’s evolutionary detail. They are the cannabis’s defense mechanism against pests, animals, and even from the sun’s harmful UV (ultraviolet) rays. They ultimately contribute to the survival of cannabis throughout its flowering cycle.

The resin as an industry jargon may refer to several things. A resin can be a trichome, a technique, or a concentrate. Aside from being referred to as a part of a plant, the resin is also used to refer to the brown or black tar that builds up in dab rigs, pipes, and bongs.

This intermingling of terms and meanings can be confusing but educating yourself with the different uses of the term will make you a smart cannabis concentrates buyer.

What is Cured Resin?

Cured resin is the technique used to preserve the cannabis plant material in preparation for the extraction method, where a resin is converted into a cannabis concentrate.

But how is resin cured? Or rather, how is cannabis cured? Curing is the process of removing moisture from the flowers in controlled environmental conditions. The curing process has several variations but to get a basic gist of how the curing process works, here’s a breakdown:

After the harvest, the cannabis plants are kept in a dark room within a temperature ranging only between 60-70°F and humidity between 45-55%. Keeping the recommended temperature and humidity requires a fan, an A/C unit, and a dehumidifier.

The initial drying could be completed anywhere from 5 to 15 days, but the telltale sign that your cannabis is ready for the next process is if the flowers are a little crunchy and some of the little branches snap rather than bend when they are folded.

The buds are manicured and separated from the branches. Next, they’re placed in an airtight container such as jars, oven bags, ceramic vessels, plastic vessels, and the like.

The curing stage is complete after 2 to 3 weeks, but an even better curing result is expected after 4 to 8 weeks of cure time. Some cannabis strains would need up to 6 months of cure time.

The process takes a while, but it helps in elevating the quality of the end product.

Cannabis plants produce cannabinoids through biosynthesis. Biosynthesis is the process of certain compounds converting into newer blends. If subjected to ideal conditions, cannabis’s THCA can be converted into its psychoactive form, which is THC.

Curing creates an ideal environment for THCA conversion. If kept in a tight container within a constant temperature and humidity of 60-70°F and 45-55%, the conversion rate of THCA to THC will be quicker than its original biosynthesis timeframe.

As a result, this increases the level of THC content, therefore, increasing the potency of a concentrate.

What is Live Resin?

For the most part, cannabis concentrates, whether coming from cured or dried buds, are pretty similar when it comes to preserving processes. Curiously, live resin, a newcomer in the industry, has a slightly unique process that sets it apart from the other preserving techniques.

Live resin, a recent innovation in preserving cannabis does the opposite. Instead of draining the plant’s moisture, live resin keeps it.

Its curation process involves harvesting fresh cannabis plants and freezing them to a subcritical temperature level. The plants’ temperature is kept that way prior to and during the whole extraction process.

In the drying and curing part of the cannabis concentrates process, the cannabis plant is drained of its moisture and chlorophyll. The trichomes are also subjected to intense heat, oxygen, light, and physical pressure.

The ultimate price of the technique is the destruction of most of the cannabis plant’s terpenes. Terpenes, which are responsible for the plant’s flavor and aroma, adds to the unique experience of cannabis use.

Because the live resin freezes the plant, the trichomes and the cannabis plant’s precious cannabinoids and other phytocompounds are preserved. Additionally, the freezing of cannabis throughout the process enables the cannabis to retain its original flavor and aroma.

Live resin produces a dark or a deep yellow-colored concentrate. Its sticky consistency is in-between a sauce and a wax, which is not too watery nor too hard. The waxiness or the runniness of a live resin varies from one concentrates brand to another.

Live resin is an innovation that started some time between 2011 and 2013 by a group of farmers and extractors based in Colorado, USA. Live resin was a brainchild of William “Kind Bill” Fenger and Jason “Giddy Up” Emo.

Because Fenger has been tending to cannabis for most of his life, he has grown accustomed to the slight differences in the flavor and aroma of fresh cannabis plants and cured cannabis.

He experimented on several techniques in an effort to preserve the flavor and aroma of fresh cannabis plants even in concentrated form.

Fenger’s mission starts realizing when he met Emo. Together, through the help of Emo’s production facility, they were able to preserve the freshness of cannabis in a technique which they named as the live resin.

Since then, live resin has come a long way from its inception. Now, live resin-processed concentrates are shelved in connoisseur markets at premium prices of approximately $100 per gram. Although these concentrates are sold at above-average prices compared to other cannabis concentrates, there are some affordable live resin products in the market with a wide range of options as well.

As long as the demand for flavorful cannabis concentrates options exist, more and more live resin products will hit the shelves. After all, who does not want to savor the original fragrance and flavorful of a cannabis strain?

There are several differences between cured resin and live resin. If you’re a connoisseur or a consumer, it’s important that you know how to distinguish one method from another.

1. The primary difference between cured resin and live resin is the condition of the starting product, which will be defined by the method of preservation:

Since the live resin’s stye of preservation retains most of the plant’s moisture, it is under the category of a wet product. Meanwhile, since cured resin’s preservation method involves drying cannabis, it is dubbed as a dry product.

In the cured resin, instead of freezing the plant, the plant is dried and cured fully before undergoing the process of extraction. The cannabis material (let’s say a bud) is chopped straight away from the plant in the live resin method. Then, the material is immediately frozen, preserving most of the compounds.

2. The other difference is the color and consistency generated from each method:

As the preserved material from live resin is processed into a concentrate product, it shows a lighter color with a slightly different texture from cured resin. The results are usually sugary, crystal-like, or buttery, while cured resin concentrates resemble a shatter or has a wet sugary consistency.

3. The next difference is the extraction methods that follow them:

BHO or Butane Hash Oil (BHO) extraction uses butane gas, heat, and pressure to extract cannabinoids and terpenes from a cannabis plant material. Butane is not fit for human consumption, so it is absolutely imperative to exclude butane in the concentration process’s final stage.

PHO or Propane Hash Oil extraction uses propane to extract the cannabis compounds from the plant material. It uses a similar technique to BHO. The only difference is the propane component.

4. The other difference is the newness of the preserving techniques:

If cured resin is the old way of preserving cannabis, live resin is one of the modern ways of preserving the plant. You would only need a nice airtight container and several tools to keep the correct temperature and humidity in the curing process. Because the tools are quite simple, one can easily whip a curing environment at home.

On the other hand, you would need sophisticated lab equipment to carry out the freezing method in live resin. Cannabis should be frozen at -196°C, often through the use of liquid nitrogen. This freezing style alone automatically rules out the possibility of home-based production, unlike curing.

5. Finally, the intention behind the preservation style of cured resin and live resin separates them one from the another:

In cured resin, if convenience and increased potency are two of the most sought-after goals, live resin’s mission is to preserve the cannabis’s freshness.

So, the battle is over, but has live resin vs cured resin really been decided?

Well, kind of, the better option would be dictated by what your intentions are. Some people would be coming from a business, health, personal taste, economic, availability, or convenience standpoint.

Whatever point of view you’ll be coming from, stay close to your preference and personal philosophy when it comes to consuming cannabis. The primary attraction of concentrates from live resins is the feel of dabbing to an almost raw or fresh plant. The fragrance and flavors from live resins are unlike any concentrates you can buy in the market.

Health-wise, it is believed that live resins have more superior medical benefits than cured resins. In live resins, the process in which cannabis is subjected to preserves most of the terpenes, cannabinoids, flavonoids, and other compounds.

Because the therapeutic ability of cannabis mostly refers to its compounds, live resin is an ideal option if you are only looking for the medical benefit aspect of the plant. This notion is not confirmed yet, but there’s a huge probability of being true in theory.