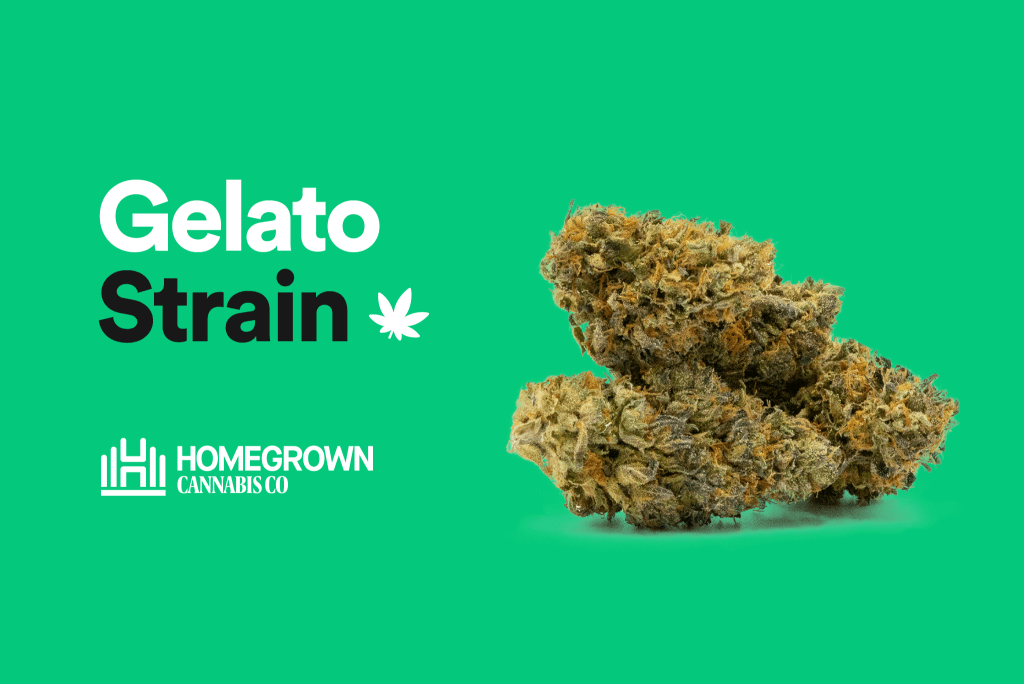 The Gelato strain (also referred to as Larry Bird) is a blend of indica and sativa with a fruity flavor and sweet yet earthy aroma. It’s a THC dominant breed that’s enjoyed by veteran stoners and those with medical needs.

The Gelato 33 packs a punch, and newbies should take it easy when trying it. The effects of the herb are almost instant. When you smoke it, you can expect a euphoric but relaxed head high.

This weed strain leaves you with optimistic feelings and focused energy that is ideal for creativity. In this post, we discuss the profile, genetic history, and expected effects that the Gelato cannabis strain induces.

We also share helpful tips on growing this hybrid weed and the expected yield. Let’s begin!

This strain isn’t for the faint-hearted. It’s well known for its potency and euphoric effects. Those who are new to the world of cannabis may be overwhelmed by the hard-hitting experience.

Let’s have a closer look at the Gelato info.

What strain is Gelato? It’s a hybrid breed with 55% indica and 45% sativa. There are several varieties of this cannabis breed, including:

A common thread among all these specimens is the sweet taste and aroma. The buds are generally smaller than other varieties, and the colors are appealing.

The nugs have purple and violet hues, distinct orange hairs, and a generous covering of white trichomes. The Gelato weed strain is terpene-rich – caryophyllene, limonene, and humulene are the most prominent in this particular specimen.

Why is Gelato strain so expensive? It’s a firm favorite of several celebrities, who even mention the name of this weed in their songs. It’s considered a luxury breed and has a lineage that gives it sought-after properties.

Unlike most indica strains, the Gelato cake strain doesn’t have sedative effects. It causes a hazy high where you’re still able to focus. This means that you can enjoy your weed during the day.

Some stoners report getting the munchies after inhaling this herb, so have some snacks on hand. It’s best to experiment once you’re accustomed to the various highs hybrids induce.

It’s known for its creativity-inducing properties. Taking a puff or two before a task might spark inspiration.

The properties of this crystal trichome-covered strain don’t stop there. It’s also useful for several ailments. Medicinal uses for the Gelato marijuana strain include:

The Gelato strain seeds are slightly more complex to cultivate when compared to other breeds. Growing this one is ideal for those who have cannabis cultivation experience and are up for a new challenge.

When you finally harvest the fat buds covered in trichomes and resin, you’ll feel immense satisfaction. The plant takes 8 to 10 weeks to flower and the Gelato strain yield is generous, ranging from 17oz to 24oz depending on the growing environment.

Based on its Girl Scout Cookie (GSC) lineage, the hybrid breed requires large quantities of calcium and magnesium. It also requires regular pruning of non-essential leaves for optimized airflow and light exposure.

It grows well in a screen of green or a sea of green setup. When you grow this breed, you need to control temperature and humidity strictly, or you risk your crop becoming vulnerable to pathogens.

If you opt to grow your crop outdoors, mild and dry conditions are the most favorable. The best time to harvest regular or feminized Gelato strain buds is in October, but autoflower specimens are good to go all year round.

If you’re up to the challenge, here’s some key pointers for growing this herb:

The original Gelato is a cross between Sunset Sherbet and Thin Mint Girl Scout Cookie (GSC) strains. These crowd-pleasing breeds are sweet and have interesting genetics as well.

The following breeds form part of the Gelato 33 strain lineage:

Gelato seeds to buy near you

If our Gelato review has inspired you, and you want to grow your own weed, look no further than our Homegrown cannabis seed shop.

There’s a versatile selection of Gelato variants available, although the most popular are listed below:

Check out our Gelato strain review from OrganiGrower. He details all there is to know about this strain, from the look and feel of the bud, the taste of the toke and the all-important growing information:

Are you still looking for answers after reading our Gelato strain review? If you need more Gelato strain info, browse the most common questions below.

Is Gelato strain indica or sativa?

Gelato strain is an indica/sativa hybrid. It’s a blend of Sunset Sherbert and Thin Mint Girl Scout Cookies. The indica side is more dominant at 55% and packs quite a punch, making it a popular cultivar. It gets its sativa component from the Girl Scout Cookie parentage.

How does Gelato strain make you feel?

Users of the Gelato weed strain report that they feel relaxed but mentally stimulated. It hits quickly, so you’ll find yourself on a mellow high within a few minutes after use. Besides experiencing clarity in thoughts, you may also notice increased happiness, relaxation, and euphoria.

What is Gelato strain good for?

Some users have reported relief from pain, fatigue, and insomnia using Gelato marijuana strain. The cultivar has also been useful in treating anxiety, stress, and depression. People with pain-related ailments have reported some relief after indulging in the hybrid. However, these benefits are not medically proven, and the results may vary between users.

How much does Gelato strain cost?

The cost of Gelato strain seeds varies depending on which type you’re looking to buy. Feminized, regular, and autoflower seeds offer different benefits and growing requirements, hence why they are priced differently.

Dispensaries have been known to sell the weed at $150 per ounce. Buying Gelato strain seeds as low as $10 allows you to grow your own and save a fortune.

The Gelato strain THC level is a hefty 21%, and experienced users enjoy the potency of the hybrid along with its speed of kicking in. As it can be a little overwhelming for novice users, it’s best to try the indica blend at home to find out exactly how you’ll react to the strain’s effects.

Is Gelato strain hard to grow?

Gelato strain seeds are more challenging to bring to maturity than other variants. The plants require generous amounts of magnesium and calcium. Prune the bushes regularly to improve airflow so the plants can grow to their full potential.

The Gelato strain also needs a controlled environment with monitored temperatures and humidity levels to prevent the onset of pathogens. Cultivating this strain is best left to intermediate and experienced growers.

How long does the Gelato strain take to grow?

Once your Gelato strain seeds have germinated, they take 8–10 weeks to flower with generous yields. Depending on the growing environment, you can get 17oz–24oz from your crops.

What are the effects of the Gelato strain?

Unlike many other indica strains, the Gelato cannabis strain doesn’t have sedative effects. Even though you’ll experience a euphoric high, you’ll remain focused and alert throughout. It’s an ideal strain to use during the day when you’ve got tasks to complete.

What are the side effects of the Gelato strain?

As with most marijuana strains, you may experience mild forms of cottonmouth and dry eyes. These usually occur if you overindulge in the Gelato strain. You need to stay hydrated and use saline eye drops when needed to mitigate the side effects.

The weed strain gelato is arguably the most sought-after exotic marijuana strain available today. What makes it exotic? Any cannabis strain with a wow factor for flavor and aroma can fall into this category. In addition, if it’s rare for the region, it’ll be considered exotic.

Why is the Gelato strain so popular?

Also known as Larry Bird, the relaxing and uplifting effects are one reason for its popularity. However, there’s more to this hybrid than just the mesmerizing effects. The taste of creamy berries, blended with an earthy flavor, reminds users of delicious ice cream, hence the telltale Gelato strain name.

Is Gelato a good outdoor strain?

The Gelato strain does best indoors with a Sea of Green setup. However, it can perform just as well in mild but dry climates if you grow the plants outdoors. The autoflower variants can grow all year round, but regular or feminized seeds are best harvested in October.

Why is Gelato such a good strain?

Due to its rich terpene profile, the Gelato strain delivers a stimulating high. This euphoria is possible with genetic blends that have moderate THC levels. It acts fast and lasts long, which means that you can enjoy the effects during the day without getting hit by couch-lock. The delicious ice cream flavors are what keep users coming back for more.

The short answer is yes. Gelato strain is a superior cannabis strain that’s very popular worldwide. This accolade means that the plants have the highest-quality flowers and are placed on the top shelf to be more visible. These types of strains come from master growers. They have a high potency with great aromas and flavors.

Does Gelato make you paranoid?

As with any marijuana strain, it’s best to use it with restraint. Overindulgence in the Gelato weed strain could cause some mild episodes of paranoia. If you’re a seasoned user of cannabis, the chances of experiencing this lessen as your body is more used to the effects. Novice users should enjoy smaller doses until their bodies build up some resistance.

Growing this sweet indica dominant hybrid is a worthwhile challenge for experienced or enthusiastic intermediate cultivators. If you need assistance tracking your progress, feel free to subscribe to our Homegrown Diaries.

Here we have ample information to guide you on your cultivating journey. You can also join our Homegrown Forum, where we discuss marijuana trends and share our passion for growing this incredible herb.

Check out our seed shop to get started on your Gelato strain crop today.