Purple Weed: Myths, How to Grow & Why Is Some Weed Purple 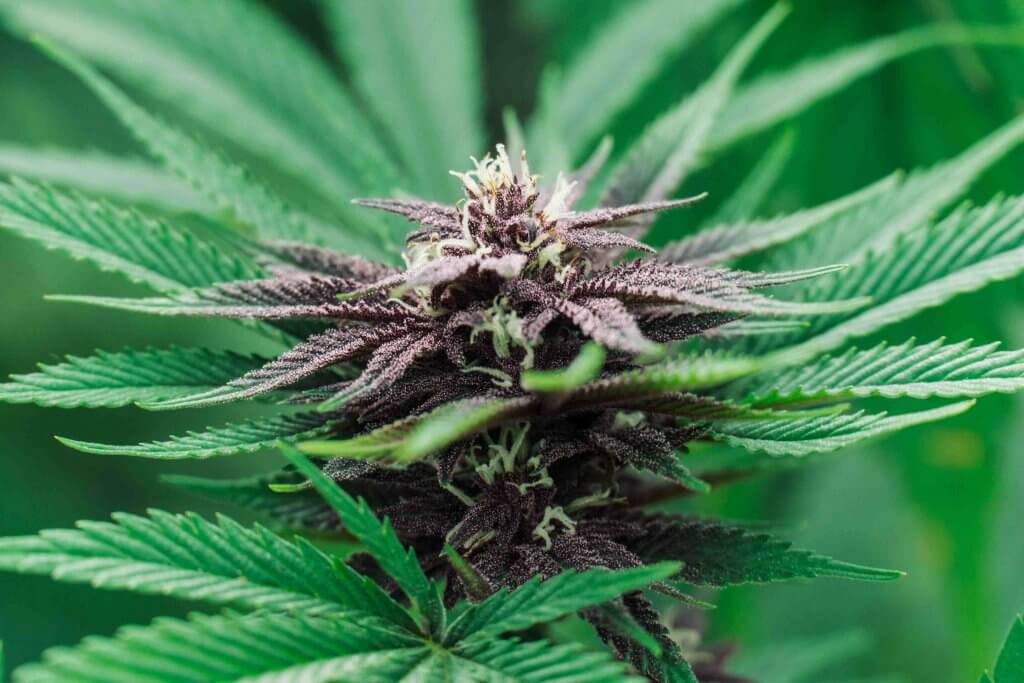 If you’ve seen purple weed for the first time, you’ll be awed by its beauty. Is it real? Yes, it is.

Here’s where we’ll review the science that explains how weed gets its violet hue and discuss the three misconceptions people have about purple cannabis.

You’ll also find out if purple marijuana is better than the typical green ones and learn how to grow your own violet plants.

Our round-up of 7 popular purple strains will give you an idea of what’s available and what makes them favorites among cannabis cultivators and smokers.

The science behind purple weed: what makes weed purple?

Before we dive into a scientific explanation of what makes weed purple, it’s important to mention that some plants you see in pictures may not be violet. This discrepancy is because many shots of regular cannabis plants are taken under a purplish LED light, which gives them that hue.

These violet lights are used in the cultivation process and are said to help your plants grow better than blue ones. However, they don’t influence the color of the resulting buds.

Why is some weed purple?

All plants have natural pigments, such as chlorophyll and anthocyanins, that give them their color. What makes weed purple is the dominant presence of the latter rather than the former substance.

Typically, most plants use chlorophyll, which helps them photosynthesize and is responsible for their green hue. When this pigment is absent, plants turn to anthocyanins, which are part of a larger class of substances known as flavonoids.

Purp weed plants get their hue because flavonoids can change the colors of plants if it’s present.

Although the word “cyan” in the name implies that anthocyanins are blue, they give plants a range of colors depending on the pH. If the pH is acidic, you’ll see red, while at the other end of the scale, you’ll get blue plants.

Purple weed is the result when the pH level is more neutral. This natural phenomenon typically occurs in the fall when chlorophyll breaks down and no longer dominates the other flavonoids. When anthocyanins prevail, plants have the potential to transform from green to other beautiful shades, like purple.

However, getting a purple marijuana plant by this method also depends on its genetics which determines which flavonoid is dominant. Without the right type of pigments and the proper amount, you can force a cannabis plant to turn purple.

What parts of cannabis can turn purple?

You’ll get purple weed because any or all of these four parts of the marijuana plant can display the hue:

Pistils: These are the sex organs of a female cannabis plant. They’re also called stigmas. You’ll notice them as fine hairs that appear on the calyx on the flower, indicating they’re female. If the pistils turn violet as they mature, you’ll end up with purp weed.

Calyxes: The part of the bud that’s formed during the flowering stage of a young plant is the calyx. It’s meant to protect the plant’s reproductive organs and stabilize the flowers. You’ll find hundreds of these calyxes stacked on top of one another in a marijuana flower.

Leaves: You can also have purple weed if the leaves of your cannabis plant turn purplish. They’re rarely seen in the final product, as you’ll trim most of them during the post-harvest stage.

Trichomes: These tiny crystals that cover your buds become opaque later on in the growing cycle, but it’s also possible for them to turn purple.

There are myths related to purple weed and the ways to create it. First, we’ll look at the common misconceptions about its traits.

Perhaps the biggest myth about purple weed is that it’s purely purple. It doesn’t have to be. Many such named cultivars have varying shades that range from dark green to even black.

As cannabis plants develop their hue due to the presence of anthocyanins, the resulting color depends on the compounds’ pH level.

Due to its novelty, some users perceive purple marijuana strains to have a higher potency than regular cannabis. However, scientific evidence shows that the cannabinoid content in the purple strain isn’t necessarily greater than their green relatives.

Purple weed is created by manipulating its growth process

We’ve already mentioned that you can’t create a purp weed plant by manipulation because its genetics dictate the pigments it has, which then determine its range of colors.

Yet, some people believe that some cultivators practice methods which induce plants to make cannabis have purple or pink buds. Most often, this is done for novelty value only.

Let’s review the common techniques claimed to create purple weed, and you’ll see why they’re nothing but myths.

All living things require oxygen to survive. Cannabis plants are no different. They need it to grow. If you deprive your crops of oxygen, you’ll hinder their growth. You won’t force it to change color. Thus, it’s a myth that restricting plants their oxygen supply will produce purple marijuana.

Another myth is that depriving plants of carbon dioxide will cause them to turn violet. All you’re doing is preventing your plant from developing properly by not providing it with the nutrients it needs to grow optimally. You’ll end up with an unhealthy plant, not purple cannabis.

While nutrients are essential for marijuana crop growth, too much of a good thing may have the reverse effect. With nitrogen, plants need it to grow, but an excess of the nute can burn and kill them. This is not the result you want. Instead of purple weed, you’ll have a brown, withered plant instead.

If you’ve any experience with cultivating cannabis, you’ll know that your crops need sufficient light to grow optimally and produce a good yield. Playing around with the light cycle won’t give you purp weed plants. All you’ll get are unhealthy ones.

Since the hues of a cannabis plant are determined by flavonoids, altering the growing medium will not produce purple weed. You’re merely messing with the quality of your plants.

Plants can survive on varying amounts of water. Cannabis that grows in the wild doesn’t get a steady water supply yet doesn’t turn purple. That’s another myth shot down. You won’t create purple marijuana plants by providing your crop with different amounts of water.

Is purple marijuana any better than the green ones?

Aside from its stunning beauty, no studies suggest the color purple makes cannabis plants different from green ones. The purple weed effects that users experience are mainly based on perception rather than science.

Research has shown that anthocyanin is an excellent anti-inflammatory antioxidant found in grapes, raspberries, and blueberries. Does this mean that purple cannabis will help people with inflammatory diseases?

The European Food Safety Authority says there’s no evidence to support the claim that anthocyanins affect human biology or diseases. Instead, the antioxidants would provide anti-inflammatory benefits, but probably only when the buds are ingested.

The effects you’ll get from purp weed have more to do with its terpenes and cannabinoids. For example, a strain with higher CBD content will provide greater anti-inflammatory benefits than the anthocyanins that create the color purple.

How to grow purple weed?

Cultivating purple weed is similar in many ways to growing regular green strains. However, two factors play a role in turning your cannabis plants purple which we’ll discuss next.

First, we need to stress that manipulating the plant during its growth period is not recommended. Such practices have been shown ineffective in producing purple marijuana. They’re more likely to be detrimental to your crop’s health.

Avoid depriving your plant of oxygen, carbon dioxide, and other nutrients that it needs for optimal growth. You should also give it sufficient light to flourish and not fool around with the light cycle to try and get purple weed.

Most of all, don’t use coloring in your cannabis plant. Most dyes in the market contain ingredients that may be carcinogenic. Using them in your crops can adversely affect their health and yours when you smoke them.

If you’re keen to grow purple weed the right way, let’s review the two essential factors that’ll give you the result you want.

The genetics of a cannabis plant plays an important role in determining the result you want to achieve, whether it’s high THC, or in this case, a violet hue.

When you’re shopping for seeds to grow purple weed, make sure you choose strains that have been bred specifically for the color purple. Those cultivars that have higher levels of anthocyanins will likely produce purple buds.

To help you select the right seeds, read on for our list of popular purple strains.

If you recall, purple weed is the result of anthocyanins working their magic. This process typically occurs at low temperatures, which is why plants change colors when fall comes around and temperatures drop from their summer highs.

By mimicking fall temperatures during the flowering stage, your plant will break down the chlorophyll and activate more anthocyanins, which leads to purple cannabis. The ideal nighttime temperature for this process should be between 10–15°C lower than in the daytime.

If you’re cultivating marijuana plants indoors, all you have to do is set your air conditioning to the temperature you want and wait for the time to harvest purple weed.

Now that you know genetics matter and selecting the correct strain is the key to growing purple marijuana, here’s a list of some of the most popular purple seeds you can choose from. In addition, we’ve summarized the key traits of each strain for your convenience.

One of the most popular purple weed plants on the cannabis scene.

A variant of the GDP purple weed that’s easy to grow without the hassle of removing males.

This purple cannabis strain is one of the parents of GDP.

This legendary purple marijuana is popular among smokers and growers.

This purp weed sativa is a descendant of Chocolate Thai and Highland Oaxacan Gold.

A sativa-dominant strain, this purple weed is the result of a cross between Purple Thai and Haze.

This purple cannabis strain is the offspring of GDP and Larry OG.

While this violet cannabis plant is much sought-after, it’s more for its appearance than its potency. There’s no evidence to show that its color makes it better than regular marijuana.

Speculations abound about manipulating elements in the growth process, such as nutrient deprivation, changing the light supply, and altering the growing medium to create purple weed. However, these claims are false, and the methods have proven to be detrimental to the plants.

There are only two ways to produce the hue in purple cannabis. The presence and effects of anthocyanins, which are determined by genetics, and low temperatures during the flowering stage.

If you plan to cultivate purple marijuana, we suggest you start with seeds from violet strains and avoid practices that are not supported by science.