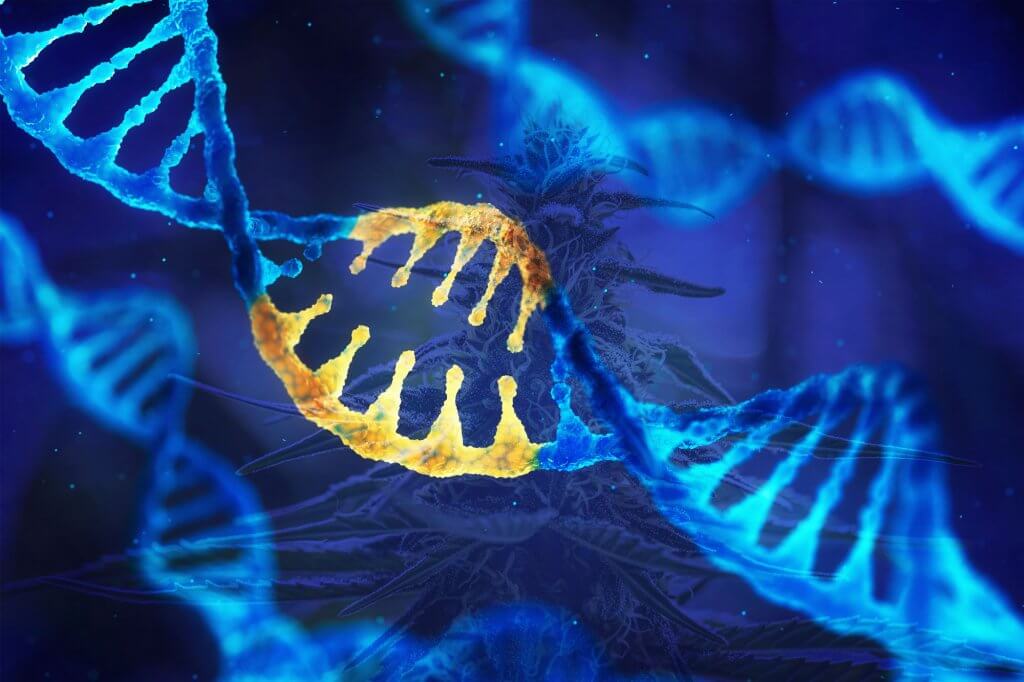 Genotype vs. phenotype knowledge is important for aspiring growers looking to step up their cultivation game. The distinction is scientific, but even amateurs benefit from learning about it.

This knowledge helps you understand why your garden isn’t a sea of identical plants. It clarifies possible expectations from a new strain and even the basics of hybridization.

In essence, these two terms refer to what a cannabis seed can achieve and what it ends up achieving in any environment. Sounds a bit confusing? It did to us at first.

We’re here to clear the misunderstandings surrounding genotypes and phenotypes. We’ll start by explaining the two definitions, then move on to their relationship, and finish with the practical application of your new skill. Let’s jump into it.

What is a genotype?

If this term sounds like something from biology class, that’s because it is. Your high school teacher probably wasn’t discussing marijuana. However, they were explaining a principle that applies across the board in the natural world.

What is a genotype, then?

Genotype refers to the specific combination of genes any cannabis plant carries.

This genetic makeup determines the range of traits it can display. Think of it as a blueprint for a weed crop. It’s full of information about what any seed might exhibit once it starts growing (keyword here is might).

The relationship of genotype to phenotype is that of might to will. The genes delineate the traits each strain carries.

This distinction goes several levels deep. Think about the three ‘types’ of cannabis on the market today. We can discuss the indica vs. sativa vs. hybrid and pinpoint points of similarity and differences. Every individual strain within any of these groups is unique, though.

A cultivar carries a genome—a collection of genes related to its kind. Then, each weed seed of that strain contains a unique genotype, with subtle variations on the parent genome.

Despite these variations, the cannabis genotype is inheritable. If a cannabis plant produces new seeds, it’ll pass its traits onto its offspring. In turn, the new crops further mutate the basic expression, potentially showing a trait that wasn’t dominant in the parent crop.

Note: You can only determine a genotype through biological tests. What your eye can see is a matter of weed phenotypes, our next point of consideration.

What is a phenotype?

Above was the basic genetic outline for a cannabis plant. Let’s move a step further.

Say you bought a batch of weed seeds and planted them together. They receive the same food and light, live under identical conditions, and grow at the same rate.

Your crops develop pretty similarly, but no two specimens look identical. You get different phenotypes of the same cannabis genotype.

What is a phenotype, then?

Marijuana phenotype occurs when a specific genotype interacts with the outside environment. It induces variations in multiple plant traits, including but not limited to:

Sometimes, even the flavor and effect profiles vary with cannabis phenotype, but that’s a much rarer occurrence. Why does this happen?

For one, the slight genotype variations in each cannabis seed cause some physical differences. Outside conditions (light, temperature, humidity, nutrients, training) further contribute to the resulting weed phenotype.

If you want another illustration, think about heirloom and landrace strains. The original plant genomes originated in various parts of the world before we got them in the States. Some breeders got to hybridizing, creating new strains, but not all did.

Even without modifications, these landraces changed due to new environments. Heirloom cannabis growers still saw variations in what you’d normally expect from a landrace. We got new phenotypes of original genomes, even without any meddling with the genome.

Unlike genotypes, plant phenotypes aren’t inheritable. For instance, a giant sativa crop might grow shorter due to a lack of sunlight exposure. That doesn’t mean that its seeds will also be short if the genotype reads ‘tall’.

What is the relationship between genotype and phenotype?

Now that you’re aware of genotype and phenotype definitions let’s connect the two points. How do these terms relate, and how does one influence the other?

We found that it’s the easiest to explain with a little equation:

What do we mean by this, and why did we mention genotype twice?

Remember what we said before about plant phenotypes. They describe how a specific genotype looks in the outside world. We can observe and classify it, but there’s another level to discuss here. Otherwise, all plants of the same strain would look very similar.

That’s why we added the genotype-environment interaction factor. Distinct genes respond differently to various environmental conditions. For example, an indica plant might breeze through harsh weather, but a sativa genome would show stunted growth under the same conditions.

The key takeaway here is straightforward. Phenotype variation has a lot to do with how a genotype reacts to any set of environmental conditions.

We’re now all on the same page on what the relationship between genotype and phenotype is. Let’s talk about the differences between the two.

Genotype vs. phenotype: What are the differences?

As you see from all we’ve covered so far, you can’t discuss genotype vs. phenotype as isolated terms. The two are interconnected, but they also differ from one another.

The most notable phenotype and genotype difference lies in its manifestation. The genotype is a thing of biochemistry, hiding beneath the seed shell and determining what will develop from it. Phenotype is much more concrete and practical. Growers can see and influence it.

The table below serves as a quick reference for telling the two concepts apart.

If you find yourself wondering—genotype or phenotype—go back to this table. Determine whether you’re dealing with an internal or external variation. Is it related to the inherent traits of your weed seeds or something you’re doing?

The phenotype in plants affects the color of the stem, leaves, and branches, among other factors. Even your ‘regular’ green cannabis displays color variation. Some strains are minty, others mossy. Some are so dark that they almost seem black.

Apart from the endless shades of green, there’s another hue that excites cannabis enthusiasts—purple. Purple weed is an example of a cannabis genotype. Strains that exhibit this shade do so due to a natural pigment called anthocyanin. All plants contain this tint, but chlorophyll usually dominates it.

The same purple genotype looks different with varying conditions, though. Why don’t we call it marijuana phenotype? You couldn’t get purple cannabis without anthocyanin dominance. That’s where it becomes obvious that we can’t discuss genotype or phenotype. We have to talk about the genetic blueprint and how it expresses itself in the real world.

In the case of this weed type, your outdoor crops exposed to cold nights would develop a much deeper purple hue than their indoor counterparts. The purple genotype looks different—produces a distinct weed phenotype—in diverse conditions.

Here’s another example, this time of plant phenotype. A pink weed plant isn’t a naturally-occurring thing. Much like its purple cousin, some plants have the genetic potential to go pink. Still, this hue only becomes prominent after significant interference from humans.

For that reason, we’d say that pink leaves and buds form a cannabis phenotype of a weed plant rich in anthocyanins. You can test the genotype vs. phenotype expression by yourself, too. You don’t have to focus on color, either, but whatever your crop chooses to exhibit.

Get two seed batches. Grow one in a consistent environment and separate the other into two different sets of environmental conditions. Observe and note changes in size, bud density, color, and leaf shapes. Doing it yourself will explain this distinction much better than a thousand written examples.

Now that you know what genotypes and phenotypes are let’s dive into more detail to explain the diversity you might see. We’ll start with the genetic makeup.

Every little cannabis seed has a unique genotype, even if they originate from the same strain. These differences tend to be slight, but a trained eye will notice them in their growing patch.

We don’t truly have ‘types of genotypes,’ especially when discussing genotype vs. phenotype. We can talk about indica and sativa, high-THC and high-CBD, fruity and skunky.

Describing all these points of diversity would be time-consuming and never comprehensive, though. Instead, we describe how much the following factors can vary:

The variants differ slightly from one another, developing to adapt to new environments step by evolutionary step.

A note on clones

Each new seed a marijuana plant produces contains inherent genetic variation. What if we wanted to make two plants 100% identical, though? You can do so, but you’d have to replace breeding with cloning.

Clones are identical copies of the original strain, grown from clippings instead of seeds.

The new crop will display the same traits one generation down the line, but only under one condition. The growing environment has to be the same for the offspring and the parent.

Even with identical genotypes, changes may occur with varying conditions. You might get different marijuana phenotypes if you change the light conditions, nutrition, or anything else.

Unlike genotypes, weed phenotypes are something we can see and classify. Here are some of the most prominent types of phenotypes you can expect in your garden:

The list goes on. As you can see, the cannabis phenotype can refer to any observable trait of the plant once you get growing. The factors combine to describe any crop you’re growing.

We sound like a broken record at this point, but it pays to repeat this. We wouldn’t be having the genotype vs. phenotype discussion if the environment didn’t significantly influence how a crop looks, grows, and feels. For that reason, we’ll end by examining the factors to keep in mind to produce the best cannabis phenotype.

Tip: If you’re looking to produce results as close to the advertised cannabis plant as possible, follow the guides provided by the seed bank. That way, you mimic what they did to achieve the optimal marijuana phenotype.

Cannabis uses light as nutrition, converting it into the goodies necessary for vegetative growth and flowering. As a result, low and high light conditions impact the resulting marijuana phenotype.

Cultivators nowadays get to choose between two main growing mediums—soil and hydroponic setups. The two cause some variation in weed phenotype.

Notably, hydroponic growing boosts the yield potential of the crop. The soil makes the flavor and effect profiles more pronounced.

Moisture control is mostly relevant for preventing mold issues, but it can also influence the taste and potency of your buds. Low humidity causes the trichomes to dry out, producing a plant phenotype that’s much less sticky than you’d hope.

Keeping room temperatures too low early into vegging discourages your crop from stretching tall and proud. The resulting cannabis phenotype ends up shorter than one in warm-weather. These are often lower-yielding too.

On the other hand, dropping the temperatures in late flowering can result in a purple plant, as long as the genome allows it.

The gorgeous variety of cannabis

We hope that our phenotype vs. genotype guide helped you wrap your head around these mind-boggling terms. With this new understanding, you’ll find it much easier to:

You can now define genotype and phenotype yourself. Why not put your knowledge to the test? Visit our shop and get a batch of seeds to grow. Plant them in two different setups and track the differences.

Stay tuned to our blog for more guides on all things cannabis. We cover theoretical and practical matters to keep our community informed as they grow and smoke.

« How To Tell If A Weed Seed Is Good?
The Very Best THC Drinks »